As Provided by the Food and Environment Research Agency. 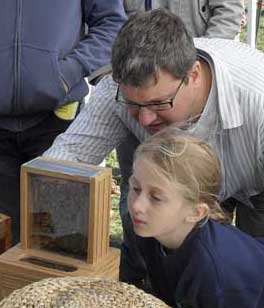 Have you always wanted to become a beekeeper but didn’t know where to start? Hopefully these pages will give you the information that helps you decide whether it is for you.
Most beekeepers start off with just a few colonies to study bee behaviour and obtain honey for the family’s needs. A few colonies is all they want to manage and even those take up enough time and effort to manage correctly. After gaining experience in the management of bees, some beekeepers then decide to keep more and go commercial. Anybody intending to be a beekeeper should firstly become familiar with bees.

After all, the honey bee, whilst a fascinating creature, is an unusual animal to keep and it is much more difficult than you may first think!

The seasonal colony management work is necessary and if you suddenly need to treat your colonies, it needs to be done without delay. Otherwise when you come back from holiday the colonies may have collapsed suddenly. You may have to visit the bees once a week to carry out swarm control and supering during the summer, if you neglect the bees they will swarm and you’ll lose half of the productive bees.

Before taking up the craft of beekeeping bear the following in mind: keeping bees is like livestock management. They require looking after and even with a few colonies this requires commitment. You have a duty of care to look after them properly, it can be quite demanding and heavy work at times, for example handling heavy honey supers or shifting bees from apiary to apiary for pollination or to crops for honey gathering. It means making sure the bees have enough food at all times and enough space for the expanding colony during the season. During the summer months you need to carry out visits each week, to control swarming, to make sure that your colonies have young queens, to ensure that they are kept disease free or that Varroa populations are kept down to manageable levels using appropriate medicines. You cannot keep bees without Varroa in the UK. The seasonal colony management work is necessary and if you suddenly need to treat your colonies, it needs to be done without delay.

There are different strains of the honey bee, Apis mellifera. Many in Britain are black or dark brown; others have yellow bands on their abdomens. Some bees are very easy to control, while others are virtually uncontrollable, especially in the hands of a beginner. It is very important to source bees of a docile temperament. The last thing you want in your first season is to have to deal with vicious bees and decide to give up beekeeping as a result. You can not keep highly defensive bees in a garden close to neighbours, but you can a docile colony. There are many bees that are quite docile and easily manageable and keeping these is both desirable and achievable if you find the right supplier of the bees. You may hear from an “old timer” that defensive bees produce more honey, however there is no connection between the temperament of bees and their potential productivity.

Honey bees, are social insects and live together in colonies. The honey bee colony, is composed of:

From early in the year until late autumn most colonies have immature forms, collectively known as brood. These are reared in wax combs which also contain the colony’s food stores.

During winter breeding ceases, or is greatly reduced, and the colony lives on the food stores it has accumulated during the summer. The honey bees’ ability to survive on stored food during unfavourable seasons or conditions, and to regulate the temperature of their brood nest independently of the temperature of their environment has enabled it to spread to most parts of the world. In the winter, in our temperate climate, when the colony becomes inactive, the number of workers drops down to about 20,000, the drones are usually evicted (although some over-winter) and the queen is kept warm in the centre of the nest, this is called the winter cluster. Worker bees in the summer only live for about 6 weeks, but in winter live for about 6 months. Drones live for several months, but queens can live for several years.

During recent years we have become increasingly aware of the important service bees give through pollinating many agricultural and horticultural crops as well as wild flora, and their value as pollinators far outweighs their value as honey producers. 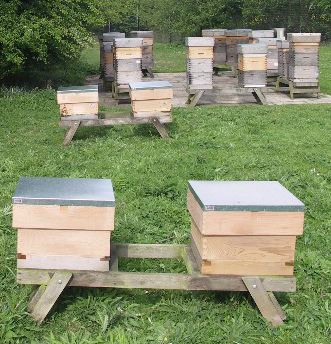 Apiaries should be sited so that only the beekeeper is ever likely to be stung by the bees. By having high walls or hedges around an apiary, bees can be forced to fly well above close neighbours. If neighbours or pets get stung, public relations can be impaired and the risk of danger to life, though small, cannot be overlooked.

Small numbers of colonies can be kept almost anywhere in the British Isles, even in urban and suburban areas and honey yields can be surprisingly high. The number of colonies kept depends on available forage and limitations of the site. If and when the beekeeper wishes to build up beyond the capacity of their home apiary, they will need to establish out-apiaries, these are apiaries away from home. It is quite feasible to keep bees away from home because, unlike other forms of livestock, bees do not require daily attention. Nevertheless, the colonies must be given attention when they require it. An out-apiary should be readily accessible by road, throughout the year. It should be sheltered, dry and sunny and frost pockets should be avoided. Some areas, although providing food for a few colonies, are incapable of supporting large numbers throughout a whole season. In some areas it may be advisable to practice migratory beekeeping (shifting colonies to suitable crops when they are in flower). This may be for pollination or for honey. 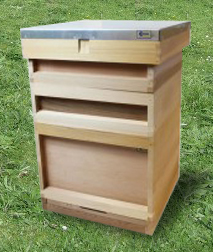 A bee hive can be described as any cavity which will house a colony of honey bees, e.g. colonies will thrive in hollow trees, holes in rocks, in wooden boxes or in the traditional straw skep. But today honeybees should only be kept in movable comb hives. These help sound colony management and, importantly, the regular and thorough examination of brood for symptoms of foul brood disease. Various designs of hives may be obtained from manufacturers and equipment suppliers. The National, Smith, Modified Commercial, Langstroth and Dadant are all single-walled types. Of these, the National and Smith are the most popular in Britain. However, only one type of hive should be used so that the various parts are interchangeable. If second-hand hives are obtained it is essential that they are free from foul brood infection. 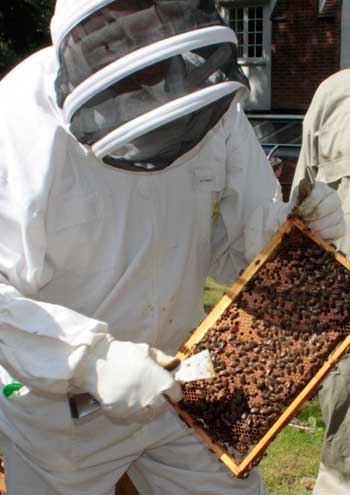 When bees are handled protective clothing and equipment is required to minimise the number of stings. This gives a confidence which allows efficient colony management and close observation of bee behaviour. Protective clothing should comprise of a hat and veil, that will fully protect the head and face whilst allowing clear vision and free flow of air; a light-coloured, zipped, light-weight boiler suit worn over normal everyday clothing; suitable beekeeping gloves which provide protection but also can be either cleaned easily or disposed of, and safety Wellington boots or working boots with protective toe caps. Good apiary hygiene is a very important part of apiary management to prevent the spread of pests and diseases from colony to colony or apiary to apiary. Filthy bee suits and poor practices such as sloppy apiary hygiene will increase these risks.

A bee smoker should always be used to subdue the bees. Another essential part of the beekeepers kit is the hive tool, which is needed for prising frames and various hive components apart, as well as scraping frames and cleaning inside hive surfaces so they are free of beeswax and propolis (a plant resin collected by bees).

If you produce honey then you will need to purchase a honey extractor of some type, plus the jars and labels for bottling the honey and have a means of filtering the honey prior to bottling.

Further and more in-depth information can be found at:
BeeBase
The British Beekeepers Association